For those of you who find evolution, ecology, biology, volcanoes or even geography fascinating, we think you should give this article a perusal. You must have often heard how volcanic eruptions end up creating some kind of new land mass. Well, Surtsey Island is something in that line. It is quite a new addition to this world.

Now, let’s start from the very beginning. In the end of 1963, a cook aboard a trawler saw some smoke coming of the southern parts of Iceland. Assuming it was a boat in need of help, the crew changed course but instead were the first witnesses to a new island being formed. It was technically an underwater volcanic eruption which went on for almost four long years and in mid-1967, a new island was formed.

Contrary to what some might think, unfortunately this cannot be your next vacation spot. You can probably have a look of Surtsey off the south west of Vestmannaeyjar or the Westmann Islands and that too only in fine weather. 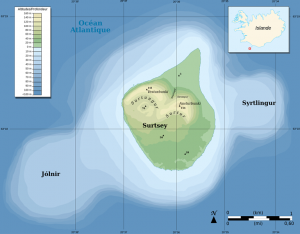 Due to the steady wave and wind erosion Surtsey is totally unstable and uninhabitable. In fact, it is quite possible that by 2100 it might join the aquatic community again. Only some chosen researchers and scientists are a few of the fortunate who are allowed to set foot out here.

It is one amazing site which shows how flora and fauna might grow or present themselves without any kind of human involvement. And Surtsey’s story seems to be just the beginning. Ever since its formation Plant parts and seeds have been found washed up on the shore and the higher plant – Sea rocket or Cakile Arctica was discovered in 1965. Researchers have also studied the appearance of bacteria, fungi and moulds of different kinds.

There have also been some winged guests here. After the eruptions ended, birds have been sighted nesting in Surtsey. Approximately, 89 species have so far been recorded and of them 57 have been found to breed in other parts of Iceland. Guillemot and Fulmar were the very first guests and many new additions have since been seen; the Atlantic Puffin being one such addition. The Golden Plover has also been sighted. Grey and Harbour Seals as well as several marine, submarine species are quite well established in Surtsey now. The soil of Surtsey is also seeing some higher forms of land life. 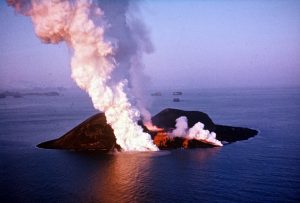 In the year of 2008, Surtsey joined the UNESCO World Heritage List. Since it has been protected, it is more or less a natural laboratory which will continue to provide the world with invaluable knowledge. It has also joined the World Heritage Marine Programme.

As of now, the island is completely undisturbed and that in itself is an outstanding fact. However, for research purposes there is a small helipad, a weather station and a web cam. Surtsey remains to be an astounding site of biological and ecological processes. Just the thought that an isolated island can be the home to new plants, animals and sea life is not less than a wonder and yes that’s true.